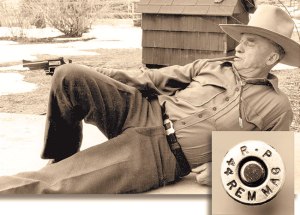 “When the legend becomes fact, print the legend.” Those words from The Man Who Shot Liberty Valance felt very appropriate for this article. It seems that in any community there are always certain people whose reputation precedes them and are held up to a godlike standard. In the firearms community, some of those demi gods are Jeff Cooper, John Browning, Massad Ayoob and Elmer Keith.

We’re going to focus on Elmer Keith here. For those of you who aren’t the gun nerd that I am, Elmer Keith was a prolific firearms writer and enthusiast. He wrote for multiple firearms publications and had nine books published. He was instrumental in developing the .357 magnum, the .44 magnum and the .41 magnum. He developed the “Keith” style bullet which offers more reliable penetration for hunting applications. Over the tenure of his life, he influenced so many people and became known as quite the polarizing figure.

These are the blurb facts that I was familiar with. I knew the hit list of why he mattered, but didn’t know how he traveled down the path. I was pleasantly ignorant until I learned of this little episode. Elmer Keith was a novice reloader and while developing a powerful load for a Colt Single Action Army, it blew up on him.  In the man’s own words;  “When the gun rose from recoil of the first cartridge I unconsciously hooked my thumb over the hammer spur and thus cocked gun as it recovered from recoil. When I turned the next one loose I was almost deafened by the report and saw a little flash of flame. My hand automatically cocked gun and snapped again but no report. I stopped then knowing something was wrong. The upper half of three chambers was gone. Also one cartridge and half of another case. Also the top strap over cylinder. My ears were ringing otherwise I was all O.K.” (American Rifleman, August 15, 1925)

These are the little things that are glossed over by those who pray at the sanctuary of Elmer Keith.  No one mentions that as the catalyst that turned the man into the myth. No one ever said this rudimentary mistake began his journey down the path of becoming iconic. If someone had mentioned this to me, I guarantee I would have been far more interested in the man.  In the last few weeks, I have devoured vintage Elmer Keith articles and fallen in love with his brash style of writing. I have enjoyed his zest for life and his take no prisoners attitude. The man was extremely knowledgeable and has a great way of teaching the reader. I see that he was worth the hype.

Maybe I’m in the minority, but I like flaws. I gravitate to people who fight through the muck and fail. I need to know that you fucked up before you succeeded. I need to know of the faults to appreciate your accomplishments. If we will humanize our heroes and demote them from their gold plated altars, people might be more apt to appreciate them. They certainly won’t resent them or ignore them if they know they made the same errors we all do. I guess the takeaway is keep your idols in perspective. If you really want others to respect them the way you do, keep your starry eyed gushing to a minimum.

Need more? Ian at Forgotten Weapons has an excellent video showing the aftermath of the blown cylinder here.

Cody Jemes is the co-host of the Bored Shenanigans podcast available via iTunes and Stitcher. See more of his articles here. Also enjoy his poetry blog here  or download his e-book here. Be sure to follow Bored Shenanigans on Twitter or Facebook.